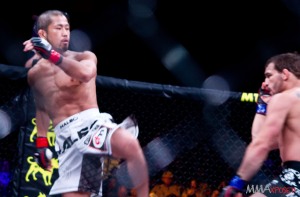 Gono has built a reputation throughout his career as a warrior that rarely puts on an uncompetitive fight. His personality both in and out of the cage enabled him to become one of Japan’s all-time great MMA fighters.

Chandler on the other hand has been running through his opponents and proved again that he is among the world’s best lightweights.

It was at the post-fight press conference that a teary-eyed Gono announced his retirement through his translator. The media in attendance gave “The Japanese Sensation” a standing ovation, remembering the legendary fights that he was so often a part of.

Fans that only follow the UFC may not understand the depth of Gono’s legacy. A truly seasoned fighter, he has fought all over the world for Shooto, Pancrase and Pride. He only signed with the UFC in the twilight of his career, but that doesn’t change the fact that he’s fought top tier competition for almost two decades.

Fans of Pride may remember his flare for flashy ring entrances and pro-wrestling style demeanor. He created many characters, such as “DJ Gozma” and always made the crowd smile even before he would enter the ring.

If this was Gono’s last fight, the sport has truly lost a legend. While critics will point to the fact that he never won any major titles or tournaments, his gameness, passion and skills will not soon be forgotten.

This entry was posted on May 6, 2012 by MMAxposed. It was filed under Bellator and was tagged with Akihiro Gono Retires, Bellator 67, Japan, Michael Chandler, MMA, Ontario, The Japanese Sensation, UFC.