The main event featured Bellator Lightweight champion Michael Chandler defeating veteran Akihiro Gono by TKO. Chandler kept pressing early in the fight, forcing Gono to back away. With almost a minute into the first round, Chandler landed a big right hand, knocking Gono down, and finishing him with strikes at 56 seconds. At the post fight press conference, Gono announced his retirement from mixed martial arts competition. 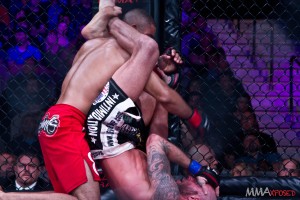 Bryan “The Beast” Baker defeated Ben “Killa B” Saunders by unanimous decision in an intense three round bout. The fight went back and forth, with Saunders going for both a kimura and triangle in the first round. Baker was able to escape, and stopped any further submission attempts by Saunders. The second round saw Baker take more control of the fight, pressing Saunders against the cage and landing some powerful shots. Near the end of the round, Baker took Saunders down, gained side control and dished out some ground and pound. The third round was more of the same, with Baker controlling the fight, getting takedowns and even slamming Saunders to the canvas. At the end of three rounds, the judges scored it 29-28, 30-27, 30-27 in favour of Baker who advances to the finals of the Bellator Season Six Welterweight Tournament.

END_OF_DOCUMENT_TOKEN_TO_BE_REPLACED

MMAxposed’s Jordan Maskell has the latest results from Bellator 67 LIVE from Casino Rama.

Dom O’Grady by verbal submission via armbar with 4:51 seconds in Round 2.

Rounds begins with both men feeling each other out. Nordine lands a kick, follows up with a combo, another kick. MacGrath returns with some punches, Taleb lands number of combos, left leg kick & big head kick. Taleb lands flying knee, takes him to ground. MacGrath get Taleb’s back, MacGrath presses Taleb against the cage, lands some big shots. Big straight left by Taleb, with big left returned by MacGrath. Round ends.

END_OF_DOCUMENT_TOKEN_TO_BE_REPLACED

MMA is back in Ontario as the province gets set to host Bellator 67 tomorrow night. The fourth Bellator to take place in Canada, and third to be held at Casino Rama has all the potential for a night of great fights.

The card will feature a non-title super fight between Bellator Lightweight champion Michael Chandler (9-0-0) and PRIDE, UFC, and DREAM veteran Akihiro Gono (32-17-7). Chandler is undefeated in his MMA career, winning the title in his last fight, while Gono has lost his last two fights.