Seven fights were refurbished due to the injury bug at UFC 149 in Calgary and the results were not pretty.

“We broke the gate record here tonight and I’m embarrassed by it,” says UFC President Dana White. “The undercard delivered, they were awesome. The main card did not.”

The main event saw Renan Barao capture the interim bantamweight championship after outpointing Urijah Faber for five straight rounds. It was a highly technical fight that was plagued by boos and chants of “refund.”

A crushing knee in the first broke Faber’s ribs, successfully shutting down most of his offense the rest of the night. Barao now faces 135-pound kingpin Dominick Cruz as soon as he recovers from last month’s ACL surgery.

The co-main event truly disappointed as Hector Lombard’s 24-fight winning streak came to an end at the hands of Tim Boetsch. It may have been a case of octagon jitters, but Boetsch managed to take a split decision over a guy many thought could be Anderson Silva’s next challenger.

“It’s the unfortunate thing about hype,” says White. “When there’s a lot of hype behind you and you don’t live up to it, it goes away pretty quick.”

Boetsch is now 4-0 at middleweight and a serious contender, having previously finished Yushin Okami. Vegas odds makers called Boetsch a 4-1 underdog and his accomplishment should not go unnoticed, considering he broke his foot in the second round.

In perhaps the biggest snooze fest of the night, heavyweight Cheick Kongo shut down Shawn Jordan by pressing him against the cage for three full rounds. The only highlight was an inside elbow that caught Kongo’s groin in round one.

END_OF_DOCUMENT_TOKEN_TO_BE_REPLACED

UFC 149: Takes over Calgary with a stacked Canadian card

The first UFC event in Calgary, Alberta, Canada will happen this Saturday night. The event, scheduled to take place at the Scotiabank Saddledome in Calgary, will be headlined by an Interim Bantamweight title bout between Urijah Faber and Renan Barao. A slew of injuries has plagued the July 21st event, with names including Michael Bisping, Antonio Rodrigo Nogueria, and Thiago Alves having to be pulled, and the card being rescheduled multiple times.

The third fight between Faber and current Bantamweight champ Dominick Cruz, originally set for UFC 148,  was moved to the card until Cruz had to withdraw as well due to a knee injury. Therefore an interim belt was created. Faber is coming off a “submission of the night” win over Brian Bowles at UFC 139, while Barao has had 29 fights without a loss.

UFC 149 will also feature the promotional debut of Middleweight Hector Lombard. Lombard is currently on a 20-fight win streak since drawing with Kyle Noke in 2007. The former Bellator, CFC, and AFC Middleweight champion will face Tim Boetsch, who’s original opponent Bisping, had to withdraw due to injury. Many consider Lombard to be a legitimate contender for Anderson Silva’s Middleweight title and see this bout as a title eliminator. Boetsch is on a three-fight win streak himself, getting a come-from-behind third round TKO victory over Yushin Okami at UFC 144.

END_OF_DOCUMENT_TOKEN_TO_BE_REPLACED

Gagnon Hoping to Debut Big At UFC 149 in Calgary 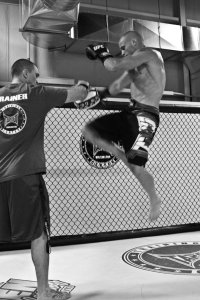 Following a false start in January, Sudbury native Mitch “The Machine” Gagnon is set to make his UFC debut this Saturday night on the undercard of UFC 149 from Calgary. It is really a night of Canadian debuts as, Gagnon and fellow Canadian fighter Ryan Jimmo are both getting their first crack at the big time.

Gagnon stated on Twitter earlier this week that he is currently reading UFC 149 headliner Urijah Faber’s book, and he better hope to learn something from it. The Team Shredder product out of northern Ontario will be in tough competition against Team Alpha Male fighter Bryan Caraway. Caraway brings some good experience to the cage, coming off a win against Dustin Neace in his own UFC debut last December. Caraway has fought some very tough opponents in his career, with notable losses to Mark Hominick and Fredson Paxaio. His twenty-one fights to Gagnon’s nine give a clear edge in experience to the American.

Gagnon is a very strong, compact fighter and his ground game is tremendous. He holds a Canadian regional title and has fought and beaten some tough local talent. This is a nice match up for him to get his feet wet in the UFC with his strength being his key to victory. Caraway is also a submission wizard with 14 of his 16 professional wins coming via tap.  He poses a formidable challenge for Gagnon and will definitely surprise and make some noise if he wins on Saturday night.

Gagnon has not fought since he defeated David Harris at Ringside MMA 12 in October of last year and cage rust could be a factor going in to this fight. A saving grace may be the fact that Caraway hasn’t fought this year either so they will both be willing and eager combatants.

Gagnon is one of six Canadian fighters on the preliminary card with a seventh, Adrenaline welterweight Chris Clements the only Canadian on the main card. Clements stepped in for an injured Thiago Alves against opponent Siyar Bahadurzada, but will now face another replacement in the always game Matt Riddle. The Calgary card has been plagued by injuries and is virtually unrecognizable to the original card that was announced months ago.

The seemingly cursed card has lost the likes of Yoshihiro Akiyama, Thiago Alves, Thiago Silva, Mauricio Rua, Michael Bisping and Antonio Rodrigo Nogueira to injury or pull out. Yet in a true show of the depth of the UFC roster they have been replaced by such stars and notables as Urijah Faber, Renan Barao, Hector Lombard, Tim Boetsch, Bryan Ebersole and Chris Clements. The card remains full of world class fighters who should not be overlooked. Due to the revolving door of fighters on and off the card, this event is under-hyped and could over perform among the many over-hyped and anticlimactic cards we have experienced in the past. Don’t sleep on it.

UFC’s Chris Clements welcomes you to his home 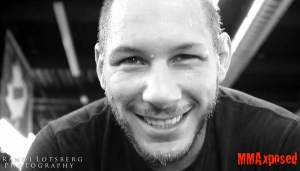 Pro Fighter Chris Clements gives us a behind the scenes look into his home. Stay tuned for our upcoming video “Chris Clements on Cloud 9” which will take you further in depth into his life getting married, becoming a dad and making his UFC debut.

Chris Clements will be fighting Matt Riddle at UFC 149 on Saturday July 21, 2012 in Calgary, Alberta.

TORONTO– The Ultimate Fighting Championship®, the world’s premier mixed martial arts organization, announced today that tickets for its inaugural event in Calgary will go on sale to the general public on Saturday, May 12.

UFC® 149: ALDO VS. KOCH sees featherweight champion Jose Aldo defend his 145-pound crown against tenacious contender Erik Koch on Saturday, July 21 at Scotiabank Saddledome. Both fighters will join local UFC® middleweight Nick Ring and UFC® Director of Canadian Operations Tom Wright for a press conference and other events (as listed below) in Calgary on Wednesday, May 9 at 10 a.m. MTN at Shaw Court.

The July 21 event marks the first of three UFC® events taking place in Canada in 2012 as Toronto (Sept. 22, location to be determined) and Montreal (Nov. 17, Bell Centre) are also set with UFC® dates this calendar year.