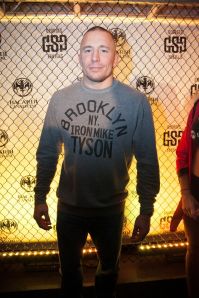 UFC superstar Georges St. Pierre may have decided to take an extended break from the rigors of the octagon, but that doesn’t mean that he’s staying out of the public eye.

Hot on the heels of the release of his documentary “Takedown: The DNA of GSP”, St. Pierre dropped in to a The Fifth Social Club Toronto to meet and greet fans as well as give a few words to the media.

St. Pierre left the UFC under a cloud of controversy. Some, including UFC President Dana White, felt that GSP came up short in his last title defence against Johny Hendricks, where St. Pierre eked out a split decision victory.

UFC brass were also taken aback when St. Pierre announced after the fight that he was taking an indefinite hiatus. But the toll of ruling over the welterweight division for the past seven years had been a heavy one. Not only physically but mentally as well. GSP alluded to issues in his personal life that he wanted to address and also revealed to CBC that he suffers from obsessive-compulsive disorder.

But rumours persisted that one of the lesser talked about reasons for GSP leaving was UFC’s reaction to St. Pierre’s insistence on using enhanced drug testing in the Hendricks fight. Hendricks wound up declining the option, and the UFC was not supportive of GSP’s efforts. White called GSP’s concerns “ridiculous” and added that “everything GSP says [lately] is a little kooky.”

St. Pierre spoke to MMAxposed exclusively on the subject, insisting that he harbours no grudge against White or the UFC, but adding:  “I want to attack the system. If we change the system, we take care of the problem. If we change one individual or one organization, it might be a problem somewhere else. I wanted to attack the system because there’s a big problem in the system. Unfortunately, I tried to make things happen and they didn’t. I think [stricter drug testing] is the next step for the sport to become more legit, more mainstream.”

Only time will tell if GSP’s crusade against performance enhancing drugs and desire for enhanced testing will be adopted by the major MMA organizations. In the meantime, the world waits to see if GSP will return to the sport to claim the welterweight title he vacated with his absence. In the interim, the best chance fans may have to see “Rush” is to grab a Bacardi and coke at an event like this one.

Johny Hendricks talks about UFC 167, punching GSP in the face, being a new father and Olympic Wrestling

MMAxposed was fortunate enough to partake in this past weekend’s fundraiser and charity event at ‘Woodbridge Heroes’ collectibles store in scenic Woodbridge, Ontario. The event was held in support of the Canadian Diabetes Association, the city of Vaughan food bank and SOS Children’s Villages.

The event, sponsored in part by Haymaker Fightwear, was a rousing success, raising much-needed funds for worthy charities and providing entertainment for children of all ages including super hero costumes and an exotic petting zoo.

Also featured were appearances from real-life superheroes in the form of some of the top names in MMA, including UFC #1 welterweight contender Johny “Bigg Rigg” Hendricks. Hendricks gave this exclusive interview to MMAxposed where he discusses the clash with GSP, becoming a father the day before, whether wrestling will be back in the Olympics and more. Watch as “Bigg Rigg” pulls no punches on any subject!

Photos and article by Randi Lotsberg

Participants were treated to an afternoon martial arts class last weekend, instructed by current UFC Welterweight champion, Georges “Rush” St-Pierre. Around 250 people took part in the event, hosted by Robinson’s Karate School in Newmarket, Ontario. Prior to the event, St. Pierre spent time taking photos and signing autographs with fans that came to the seminar.

He began the class explaining how he incorporates gymnastics into his training, following this up with a number of warm up exercises. Over the next few hours, St-Pierre demonstrated various techniques he utilizes while inside the octagon including his patented superman punch and how to perform an armbar.

St- Pierre had previously coached a season of the UFC’s reality series, The Ultimate Fighter against welterweight Josh Koscheck culminating in the champion defeating Koscheck by unanimous decision at UFC 124. He spent time walking around, observing participants and showing them the proper techniques of what he was teaching. GSP concluded the seminar by thanking everyone for coming out and participating.

It is unknown yet when he will be able to return to mixed martial arts competition. St-Pierre has been out of action since late 2011 with an ACL injury. His last fight was on April 30th, 2011 at UFC 129, where he defeated Jake Shields by unanimous decision. However, it is expected he will defend his title against Carlos Condit later this year.