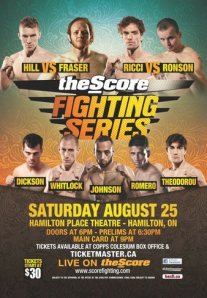 With just two days to go before the Score Fighting Series’ fifth event in Ontario, we present episode seven of the MMAxposed podcast. We get a real heart to heart interview with Hector Lombard, who dropped a split decision to Tim Boetch in his UFC debut.

It was Lombard’s first loss in 25 fights and he opens up about the haters, his injury during training camp, and Dana White’s post-fight comments saying he should fight at welterweight. He also gives his thoughts on a new possible training destination, making it to the big show, and who he wants to fight next.

In what many are predicting could be fight of the night, Canadian striking sensations Jesse Ronson and Alex Ricci also join the podcast. They will be fighting each other at SFS5 in Hamilton on Saturday, August 25th and both sound desperate to get inside the octagon.

Ronson talks about his mentality going into his fight on July 28 knowing he couldn’t afford to get hurt, the intensity of his sparring sessions and the origins of his nickname. He also thinks a victory could possibly send him to the UFC’s stacked lightweight division.

Ricci talks about the fight with Ronson, competing on four of the five Score Fighting Series cards, and a UFC dream of his own.

Let us know what you think!

Today’s podcast we talk about Hector Lombard signing with UFC, Alistair Overeem being suspended for testosterone use and recap UFC 145. We also speak with our guest Ryan ‘The Real Deal’ Ford about his Bellator debut at Bellator 67 in Orillia May 4th.