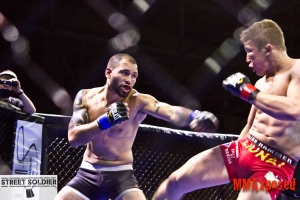 Grassroots mixed martial arts made a triumphant return to Ontario on Saturday night as the Provincial Fighting Championships made their debut card before a raucous crowd at the Western fairgrounds in London.

The venue was packed to near capacity to see hometown hero Chris “The Polish Hammer” Horodecki win a unanimous decision victory against Bellator veteran Frank Caraballo in the main event, as well as to support London-based fighters like Jesse ‘The Ghost” Gross, Shannon “The Cannon” Ludlow and others. 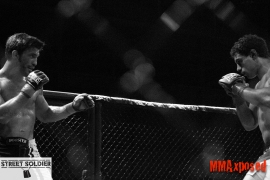 Horodecki not only carried the pressure of main eventing in his hometown into the fight, but with a December fight in World Series of Fighting in the offing it was important to him to come out of the fight injury-free. Caraballo didn’t make it easy on him, causing some nasty swelling underneath Horodecki’s eye and showing a cast-iron chin, but the veteran Horodecki utilized positional control and some nasty ground and pound in the third to seal the win on the judges’ scorecards.

While the crowd may have came to see Horodecki, they left talking about the co-main event clash between Gross and Xtreme Couture product Michael Karkula. The two combatants waged war, with Karkula’s superior ground game giving him the edge in the first round. Gross worked his way back into the fight in the second round which saw him tenderize Karkula with repeated body shots. Gross looked to continue the attack in the final stanza with a vicious knee to the body, but Karkula was able to gain back control and land punches to ride out the fight and take a split decision victory. 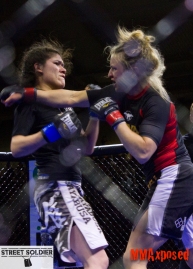 The women also provided a highlight as Adrenaline Training Center‘s Ludlow took on Alberta’s Lynelle House. Ludlow was throwing everything she had behind her punches, but House was able to avoid her attack and repeatedly counter. Ludlow was taking more and more damage until referee Brian Beauchamp thought he had seen enough and awarded the “House of Pain” the TKO victory.  END_OF_DOCUMENT_TOKEN_TO_BE_REPLACED