UFC Director of Canadian Operations Tom Wright talks with MMAxposed about the upcoming card here in Toronto at the Air Canada Centre on September 21 2013.

UFC Canada hosted the UFC 165 press conference with Jon Jones and Alexander Gustafsson at Real Sports in Toronto Ontario this past Tuesday.

Watch the media scrum with the current Light heavyweight Champion Jon Jones below:

Gustafsson will be bringing fireworks to Toronto at UFC 165 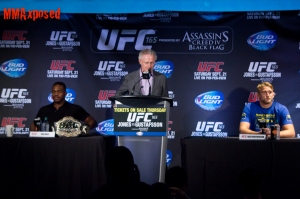 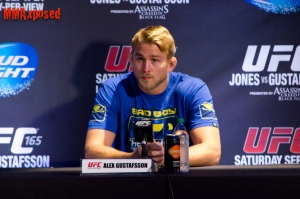 UFC Light-Heavweight Champion, Jon Jones, and the number one contender for his title, Alex Gustafsson, stared each other down earlier today in downtown Toronto. Along with Tom Wright, the UFC Director of Canadian Operations,  they greeted the media and fans for the UFC 165 Press Conference.

The two fighters addressed the crowd with two different types of positive demeanours.  Gustafsson sat to the right of the podium looking refreshed and excited to talk about his upcoming opportunity.  Tom Wright told the crowd that Gustafsson had spent yesterday relaxing at a local amusement park in the area.  Jones sat to the right of the podium with his Light Heavyweight championship title to his left and a cup of coffee to his right admitting to feeling a little tired.  Though he felt tired, he spoke to the crowd with enthusiasm, a sense of humour, and a smile.  While the two fighters had opposing energies, there was a great level of respect shared between the two of them.

“Alexander Gustafsson is a guy who really wanted a shot at the title.  And he’s a guy that I asked for.  He asked for me, I asked for him,”  Jones said before complimenting Gustafsson’s boxing and saying he was the the perfect opponent to face when attempting to surpass Tito Ortiz for the most consecutive title defenses at Light Heavyweight.  Gustafsson showed Jones a similar level of respect saying,  “I see the greatest test in my career. He’s the champion for a reason.”

While this press conference was designed to promote Jones vs Gustafsson at UFC 165, Jones was asked just as much about former UFC Middleweight Champion Anderson Silva’s loss to Chris Weidman last Saturday night.   After the fight, Jones tweeted out, “This sucks,” and further said at the press conference, “To see a great champion go down always sucks.”  As result of the loss, Jones went up to top the pound for pound rankings, but Jones did not think too much of it saying, “To become number one because of Anderson’s lost doesn’t make me feel like I accomplished anything,”  Jones looked at Silva’s loss more as a form of inspiration, telling the crowd,  “It motivates me a lot to see someone like that lose.”

Jones dissected the Silva loss even further, saying the loss didn’t change his perception of the man many regard as the greatest mixed martial artist of all time and that Silva just made a mistake – “Anderson Silva is a magnificent fighter.  I think he has an extraordinary gift.  He’s comfortable with his gift.  And he abused his gift.  He disrespected the gift by disrespecting his opponent… He got disrespectful and the war gods made him pay for it.”  He concluded his praise the former Middleweight Champion by saying, “He’s still that great Anderson Silva in my book.”

While Jones answered questions about Anderson Silva, Gustafsson talked about his road to becoming the number one contender for the Light Heavyweight championship.  It was only three months ago that he felt his opportunity slipping through his fingers when he had to pullout of the main event of UFC on Fuel TV 9 in his home country of Sweden  after suffering a cut just days before the fight.  He explained the contrast of pulling out of one main event in his home country to competing for the Light Heavyweight Championship saying, “It was one of the worst experiences of my life.  Now I just left it behind me now with my dream fight coming up.”