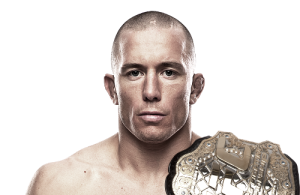 UFC welterweight champion and future Hall of Famer Georges St Pierre has made the decision to vacate the title he has help since 2008. GSP announced the decision on a conference call with the media on Friday afternoon.

St. Pierre made the decision to step away from the sport due to what he described as a lot of pressure and a lot of “criticism” in his professional life and unspecified issues in his personal life that require his attention.

St. Pierre carefully avoided the word retirement, instead preferring to keep the talk about an extended break. But he felt that he needed to vacate his title “for the respect of the other competitors” and added “I can not put myself through a training camp right now and I don’t want anyone to wait”. END_OF_DOCUMENT_TOKEN_TO_BE_REPLACED

Johny Hendricks talks about UFC 167, punching GSP in the face, being a new father and Olympic Wrestling

MMAxposed was fortunate enough to partake in this past weekend’s fundraiser and charity event at ‘Woodbridge Heroes’ collectibles store in scenic Woodbridge, Ontario. The event was held in support of the Canadian Diabetes Association, the city of Vaughan food bank and SOS Children’s Villages.

The event, sponsored in part by Haymaker Fightwear, was a rousing success, raising much-needed funds for worthy charities and providing entertainment for children of all ages including super hero costumes and an exotic petting zoo.

Also featured were appearances from real-life superheroes in the form of some of the top names in MMA, including UFC #1 welterweight contender Johny “Bigg Rigg” Hendricks. Hendricks gave this exclusive interview to MMAxposed where he discusses the clash with GSP, becoming a father the day before, whether wrestling will be back in the Olympics and more. Watch as “Bigg Rigg” pulls no punches on any subject!